Parents of daughters: listen up. There’s something going on in our Congress right now that you probably want to know about, but might not have. Perhaps with all of the other major events we’ve been hit with recently this has slipped under the radar. But this is a doozie.

Today, the Senate voted to approve a bill that would require all young women to register for the draft when they turn eighteen. Female conscription. Did you know that was even up for a vote? I didn’t. But when I read the news tonight, I found my hands shaking.

Right now, these lawmakers are deciding the future of my little girls, who are two and eight years old. Reading the senators’ callous quotes about fair is fair and don’t women want equality, my blood started boiling.

Parents of boys: This is not to say that I think your sons should be drafted. This is a post about lawmakers picking and choosing when they want women to “be equal.” We aren’t treated equally in the workplace, but we should be equal during war? They can’t have it both ways.

So here is my letter to the Senators who have decided what is “best” and “fair” for our daughters, and are using the call for women’s equality to their advantage.

Dear Senate: Here’s Why I Say NO to Female Conscription

My princess is not a soldier.

So, let me get this straight. We condition our little girls to be princesses…and then potentially force them to go fight at war?

That doesn’t add up to me. 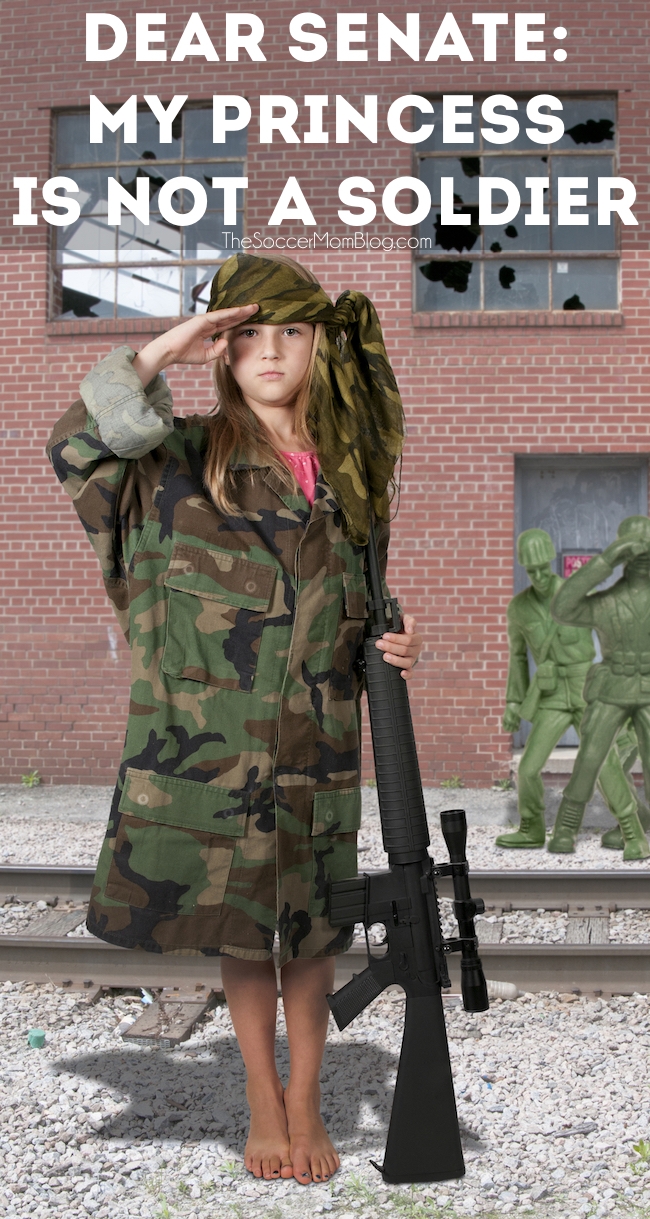 I hate the idea of anyone sending their child off to war. Like just about everyone in this country, I have family members and friends who served multiple overseas tours of duty and I know that it was torture for their parents. I don’t think any parent deserves that.

I’m also not saying that women shouldn’t be allowed to serve on the front lines, should they want to and are physically able to do so. But how can we force women to be fighters, when their society has told them for their whole lives that they are meant to do just the opposite?

And honestly, there are some cases where men and women aren’t equal…and that’s ok. Men can’t birth babies. Women should be guaranteed maternity leave that isn’t a joke. But again, that is instance where the argument for women’s equality has been used in a way that is not actually beneficial to women.

Continuing on the subject of inequality, there’s the physical aspect of it, which we can only do so much to change even if we wanted to. There’s no getting around the fact that as a whole, males have more muscle mass and more testosterone, which translates to greater strength. It doesn’t matter how hard I lift weights or how much protein I chug, I’ll never be bigger or stronger than my husband.

I do want to say that I’ve known some pretty badass girls over the years that could probably give many male soldiers a run for their money. My incredible roommate during my stay in Mexico fought off a male attacker when we were mugged in the street. But realistically, that’s not what our culture trains girls to do.

My oldest daughter is the most petite girl in her class every year. She’s sensitive and terrified at the sight of even the smallest speck of blood (mosquito bites can be cause for a meltdown). She lives and breathes all things princess. How can you tell me that this little girl should be shipped out to battle with hardened soldiers?

Senators: imagine your little princess struggling under the average foot soldier’s load of 87 to 127 pounds (which might be more than her own body weight). Can you imagine that? I can’t. I don’t want to.

Perhaps it won’t be an issue, regardless of what happens when this bill and Congress’ military bill (which does NOT include a provision for the female conscription) go before a special House committee. We can only pray that our country never has the reason to re-instate the draft.

But is that a chance we want to take?

I tell my girls that they can be anything the want to be when they grow up, and I truly mean that. If they want to be a soldier, then this mom will toughen up and deal with it. However, my daughters have wholeheartedly embraced all the pink and princesses and rainbows and butterflies and all of the other “girlie stuff” that has been marketed to them since before they were old enough to even tell us what they like. So I don’t see that happening.

You can’t tell our little girls that they are princesses, and expect them to grow into soldiers.

You pretend you’re promoting “women’s equality,” when all you’re really doing is promoting your own agenda.

Love the fonts you see? I found some of them here and you can too!
888 shares