Home » Current Events » When We Film a Tragedy Before Helping

I’m sure we’ve all seen the terrifying videos of the young boy who fell into a gorilla enclosure. Even if you didn’t click through to watch the actual video, I’ll bet that you at least scrolled by it on you social media feeds.

Why? Because there were multiple bystanders who filmed it.

I’ll admit to watching one of the videos, thinking at first it was from a news outlet. I had seen so much outrage online directed at both the mom and the zoo that I was curious to see if I could figure out the truth.

However, instead of being able to ascertain the “real story,” I was immediately distracted by the fact that this was not a legitimate news clip, but a cell phone video shot by another zoo visitor. My stomach soured at the sight of multiple cell phones in the air, recording away during those agonizing moments when no one knew how the tense situation would end.

Fortunately it ended well for the child and his family.

But what if it hadn’t?

What if all these people had instead captured a horrifying accident? What if that child’s last moments were forever immortalized in the “clouds” of strangers? 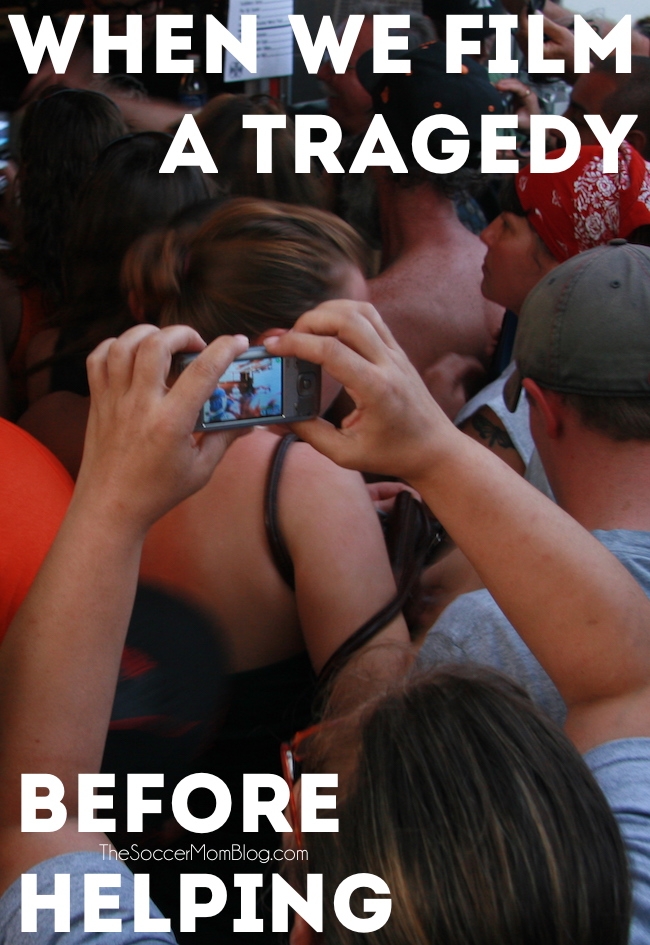 Why instead of trying to find a zoo employee, or helping the mother watch her other three children, or anything else, why did so many observers feel the need to try to be the first to get their video uploaded for the world to see?

It’s something that has been on my mind for a while. Why are we a nation of watchers and not helpers?

Recently in my hometown, there was a road rage incident that got a lot of attention. Two drivers and their respective passengers had gotten out of their cars in the middle of a busy street to duke it out after one driver cut in front of the other.

What sparked the most outrage was that one of the men threw punches (and landed them) at a woman from the other vehicle. But no one tried to stop it.

For minutes a brawl ensued, stopping traffic, and instead of pulling over to help, people pulled over to take video.

There is something so unsettling about that to me.

You always hope that if you were in trouble or your life was in danger, that people nearby would spring to action to help. I’m not so sure that would be the case.

I’m under no illusion that this trend of amateur news reporters will end anytime soon. But I hope that I can persuade you to not be one of them. I hope that if you ever find yourself witness to a crisis that you’ll leave your phone in your pocket. I hope that you’ll be a helper.

193 shares
Previous Post: « I’m not a Domestic Goddess …and I’m ok with That!
Next Post: My Medifast Experience »

Love the fonts you see? I found some of them here and you can too!
193 shares