Home » motherhood » Why I Turned Down a Job Today


The original plan was never for me to be a stay at home mom.  When I quit my job in November, I intended to enjoy the holidays at home with my family and immediately begin looking for new employment after New Years.

Within days of resigning, I had an interview lined up already.  It seemed a very promising opportunity.  After a month-long interview process in which I was all but guaranteed the spot, there was a “miscommunication” and I was told they were going to “pass.”  Definitely a bummer, but perhaps a blessing in disguise– I might have ended up working for another shady company. 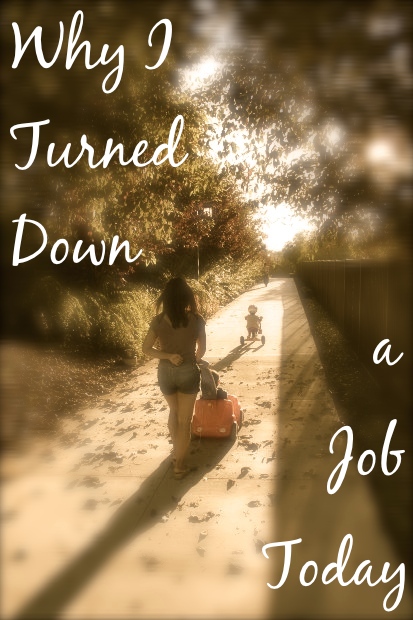 “Why don’t you just stay home with the kids?  You don’t need to go back to work– we’re doing fine.  It’s been so good for the girls.”  I couldn’t believe my husband was suggesting such an idea.  Work was all I knew.  It was part of my identity.  I’d been a part of the workforce since I was old enough to legally do so.  (Actually, I started much earlier as a groom at the stable where I took lessons in trade for attending horse shows.)

To be honest, it was such a relief to think my world would no longer revolve around someone else’s schedule (except two little girls!)  I had been so happy for the past month– apparently I had been more miserable than I realized at my last job.  It was as if a fog had been lifted and I was truly enjoying life.  I was reluctant to do anything which might jeopardize this newfound happiness.

So I stayed home and resolved to do all the things that had fell by the wayside while I was working full time.  I caught up with the laundry (for a day…then of course it was piled everywhere again, but hey I did it!)  I thoroughly cleaned and reorganized our exercise studio/game room.  I made sure the kitchen was spotless every night before I went to bed– waking up to an empty sink and sparkling counters is an amazing feeling– even I can hardly believe I just said that, but it’s true!  The girls and I took leisurely walks whenever the weather allowed.  Matt and I ran errands on his days off– just enjoying being together as a family.  I re-dedicated myself to my writing.  Work had sucked my energy to where I was literally just surviving every day.  Now I was actually living.

This went on for a few months and our family settled into a comfortable routine.  Then I got a call from a former work colleague.  She too had left the company I worked for last due to the negative environment.  Now she was asking if I would like to come meet the owner of the new spot she had gone to– they were looking for someone with my experience and she thought I would be a great fit.

Panic set in.  Things were going so well at home, was it worth it to rock the boat?  Annabelle still had a couple months before we could start weaning– I couldn’t bear the thought of dusting off the dreaded pump.  Would I still have time for my writing?  That was my “me” time– I looked forward to it every day.  Did I even want to go to work outside the home?  Was I lazy or selfish for even having these feelings?

“So don’t do it.”  Hubby said matter-of-factly.  “You don’t have to.”  He sees the world very black and white.  It’s easy for him to make decisions without getting emotional.  If only it were that easy for me! I decided to at least go in for a meeting and see exactly what the position entailed.  I was flattered that my friend had suggested me and felt I owed her that much.  I figured that it would be at least 40 hours plus some nights (as most event jobs are) and that I would simply be unable to meet those demands.  But at least I would have “tried” and given the opportunity a fair listen before politely declining.

Fast forward a few days and I’m sitting in front of one of Houston’s culinary greats.  He is an imposing physical presence, but at the same time very warm and easy to talk to.  “So what schedule would work for you?  Do you need to leave by 2?  Can you be here at 9?  Family is important to me, so I understand your situation.”  Well this was not what I expected.  Here he was asking me what would be my ideal schedule.  He was so willing to work with me that I wanted to take the job for that reason alone.

I had anticipated an easy out– a schedule to which I would be unable to commit.  Instead I had an offer on the table for a part time job with hours that were tailored to me.  The pay wasn’t great, but what part time job would be able to compete financially with the salary and commission I pulled before?  Plus I could probably learn a lot from someone so knowledgable in the industry.

Hubby was less than excited.  “It’s not that much money.  It’s not really worth it.”  At first I was frustrated– he wasn’t even listening to the positive aspects!  “If you really want to do it, we’ll make it work,” he assured me. “But I love having you home.  And what about your writing?  You won’t have as much time.”

He was trying to be supportive, but I could see that he did not want me to accept.  Could I blame him?  Sure, the part-time schedule worked great for me, but what about him?  As a night manager he often doesn’t even get home until 4am.  If I was leaving at 8am every morning, it meant he would get an absurdly little amount of sleep.  No one could function on 3-4 hours of rest every single day.  It really would be asking him to make a huge sacrifice– for what amounted to only a couple hundred extra bucks a week.

I agonized (probably more than I should have) over the decision for two days.  However, when I thought about what was best for our family as a whole, it is for me to be exactly where I am at the moment.  It still didn’t make it any easier for me to write a letter of regret turning down the job.  To accept that for the time being I am not the prime breadwinner.  To let go (at least temporarily) the part of me that sees myself as a working woman and embrace this new identity as a stay at home mom.

That is what I am right now, but that is not ALL that I am.  I am a writer.  I am a counselor to family and friends who come to me for career advice (I was there for over 15 years!)  I am a motivator to those that need a little extra encouragement to make a positive change in their lives or pursue a dream (leaving a fairly lucrative career to stay home and commit to my writing was a risk, but it is my dream).  I am the backbone of our family– keeping home and finances in order.  I am molding two little girls into strong and intelligent little ladies.

Typing it out and owning it is such an empowering feeling.  If writing is not your thing, I encourage you to say it out loud mamas!  Often when we make the choice to stay home, we often lose a little bit of ourselves and our identity as an independent woman.  But it is still there inside– your assets and gifts that you offer the world, whether it be from an office or your house.  Remember your strengths and your passions and know that you are still as important, if not more so now, than you were before!

I do feel truly blessed that I am able to have this time with my family and my girls, though it was not without sacrifice–read about the one lifestyle change that we made which allowed me to be a stay at home mom.