It must be in our family’s blood to love Outlander.

As a kid, I remember giggling with my sister about how “obsessed” our mom and aunt were over Diana Gabaldon. Just one more thing that proved that parents and “cool” did not go together. (Sorry mom! If it makes you feel any better, my kids think the same about me!)

The Outlander TV series premiered while I was pregnant. I’d been seeing previews for months, but didn’t initially make the connection between the new, heavily-promoted show, and the books that used to make my mom giddy.

My husband worked nights while I was pregnant, and while he was out I would watch TV shows that he didn’t like. I figured that Outlander wouldn’t be his thing, and used those nights as a chance to see what it was all about.

I like historical fiction books, so I actually enjoyed the show almost right away. And the more I watched, the more I figured out why all the ladies are crazy about it — Jamie.

Yea, Claire is brilliant. But it’s really all about Jamie. He’s pretty much anything you’d ever want in a man. He’s basically invincible, he’s gorgeous, he’s smart, speaks tons of languages, he’s a hopeless romantic, and he respects his woman as his match. –Swoon-

The Outlander books are expertly written, impossibly clever, and totally addicting. But let’s keep it real — women are reading these books because Jamie is their fantasy dude.

The more I watched and read (because obviously I had to see which version is better), the more I bought into it. Why couldn’t we all have a Jamie of our own? 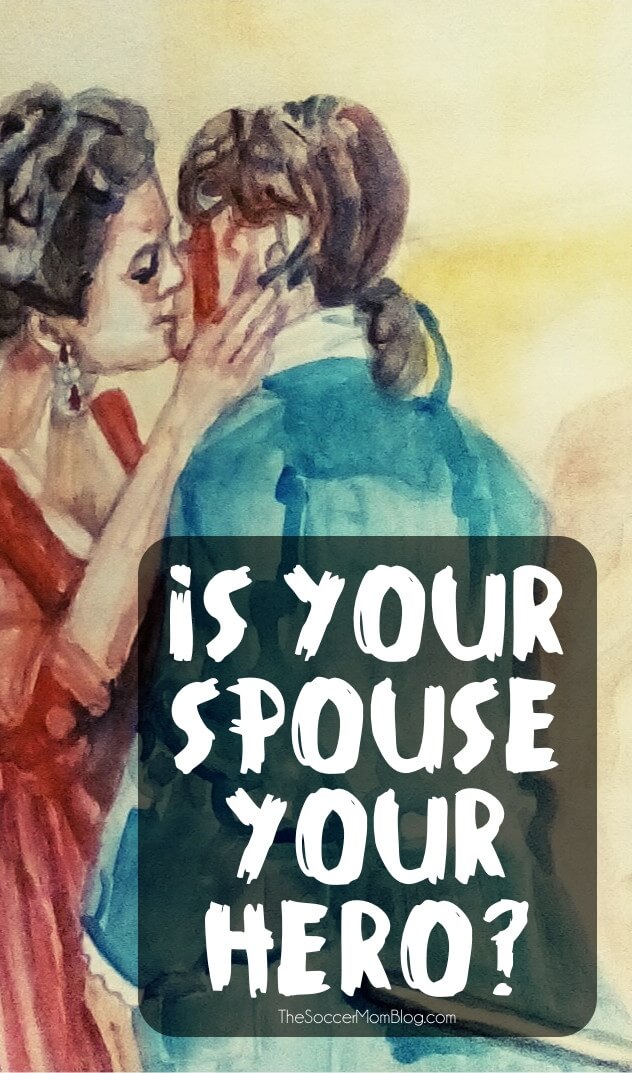 And then one day I realize that I do have a Jamie.

My husband surprisingly has a lot in common with everyone’s favorite Scotsman. You would never think it just from looking at him, so allow me to explain…

They both have long hair

Ok, so maybe you would catch this one just at a glance. My husband’s hair is glorious — luxurious, shiny black shoulder-length locks usually fastened in a low ponytail. Different from Jamie’s only in color (jet black instead of flaming red).

Interestingly, when I met my husband he still sported short spiky gel points that I affectionately dubbed “party boy” hair. I honestly never thought I would meet a guy with real-life long hair. I mean, we could all dream right, but what 21st century guy wears his hair ala Brad Pitt circa 1994? (They all should…but I digress).

And then one day my eventual husband decided to grow out his signature look. I think in part because he is like me in that it takes forever for him to get around to setting a haircut appointment. Whatever the reason, I grew to love what is now my husband’s signature style. In fact, he’s never allowed to go back to “party boy” hair again!

They both carry a knife at all times

Jamie’s omnipresent footlong dirk gives him a certain swagger — you know he’s ready to mess up bad guys at a moments’s notice.

I don’t think it’s legal these days to carry around a huge blade, and my husband is a law-abiding citizen. His knife, of the legal variety, is considerably smaller.

He might not ever need to use it (hopefully). But you know what? There’s still something sexy about a man who is ready to step up and protect you…with force.

They both have countless scars

Granted, my husband was never subjected to torture, so he doesn’t have scarring to the point of disfigurement. But the guy still has a lot of scars!

One of my main goals in life is to NOT hurt myself, but my husband goes through his days with a sort of reckless abandon. He’s always got some random new injury, be it from hitting the punching bag too hard or cutting himself at work (he’s a chef).

Sometimes he doesn’t even remember where or how an injury occurred (seriously!) If the pain isn’t extreme, it’s almost unnoticeable and an injury is considered unremarkable. While it’s worrisome to have a mate that is seemingly unconcerned with his own personal safety, I’ll admit that it does make him seem like a total boss.

This is a trait that my husband developed after becoming a father. Even if the kids are asleep or not within earshot, my husband still doesn’t avoids foul language. And he definitely notices (and points out) when other people do. Like me. (So I hardly curse anymore either!)

They say that women are attracted to the “bad boy” type, but I find it endearing that my husband is more deliberate with his words. And I know that our girls won’t say anything embarrassing that they picked up from us!

Romance doesn’t seem to be a requirement for marriage back in Jamie’s time, but aside from a couple slip-ups, Jamie is incredibly devoted and caring for a Scottish brute.

You might be surprised to know that of the two of us, my husband wins in the romance department. Sadly, I’m not very good at thinking of sweet nothings, and when it comes to gifts, I tend towards the practical. (Like, getting my husband needs new pans to cook with…not a romantic gift, but useful).

However, my husband always seems to think of the perfect present. Of course he pays attention to the traditional anniversary gifts (you know…first anniversary is “paper,” etc.) And his cards usually make me tear up.

My husband is not all mushy-mushy on a daily basis (that would be weird right?) But when it counts, he’s got the romance thing down.

Do YOU have a Jamie?

We all have our own “Jamie,” if we just take the time to see it.

No one is ever going to exactly measure up to a fictional hero, but our partner should be our hero. If they’re not, well, maybe it’s time to reconsider priorities.

Otherwise, make sure you tell that special someone know that you do recognize and appreciate all they bring to your life. Don’t just assume that they know.

I wrote a blog post to let my husband know a few of the things I love about him (that he might not have expected). It will probably embarrass him, but hopefully he like it a little bit 😉

For more ideas, check out: 15 FREE Ways to Celebrate Your Marriage Every Day

If you’re not caught up on Outlander, here’s where to find the books/videos:

The One Word That Can Destroy Your Marriage

How to Keep Your Husband Attracted to You

Rekindle the Romance After Baby

Previous Post: « 7 Tips to Relieve Itchy Skin After Pregnancy
Next Post: When Breaking the Rules is a GOOD Thing »

Love the fonts you see? I found some of them here and you can too!
8 shares