Our family is big on meal planning, so we don’t eat out very often. However, when we do treat ourselves to a restaurant meal, we more often than not choose sushi.

Our oldest, Lilu has been a fan of the cooked varieties, kani (imitation crab) and tamago (Japanese sweet egg custard) in particular, for probably two years now, and will scarf down as much as a grown-up! She has sampled some raw salmon and tuna, but was not a fan of the texture.

For Annabelle, I usually order kid’s chicken teriyaki, which she will cram into her mouth as fast as her little hands are able. However, on one of our most recent trips, the bright colors of the raw fish on my plate caught her eye. Her eyes widened as I grasped a piece of deep red tuna between my chopsticks, and then she gave me the magic word: “PEASE!?!”

I had never considered giving my 15 month old baby Nigiri (raw fish over rice) before, and I shoved the entire piece of tuna in my mouth quickly so it would be out of sight. Annabelle’s face fell and she sadly whimpered, “peeeaaassseee….”

For the rest of the meal I was able to distract Annabelle with cooked sushi: mostly fried soft shell crab and shrimp tempura (only the good stuff for this little one, as she scoffs at her sister’s favorites). But it got me wondering, when CAN my baby eat sushi? 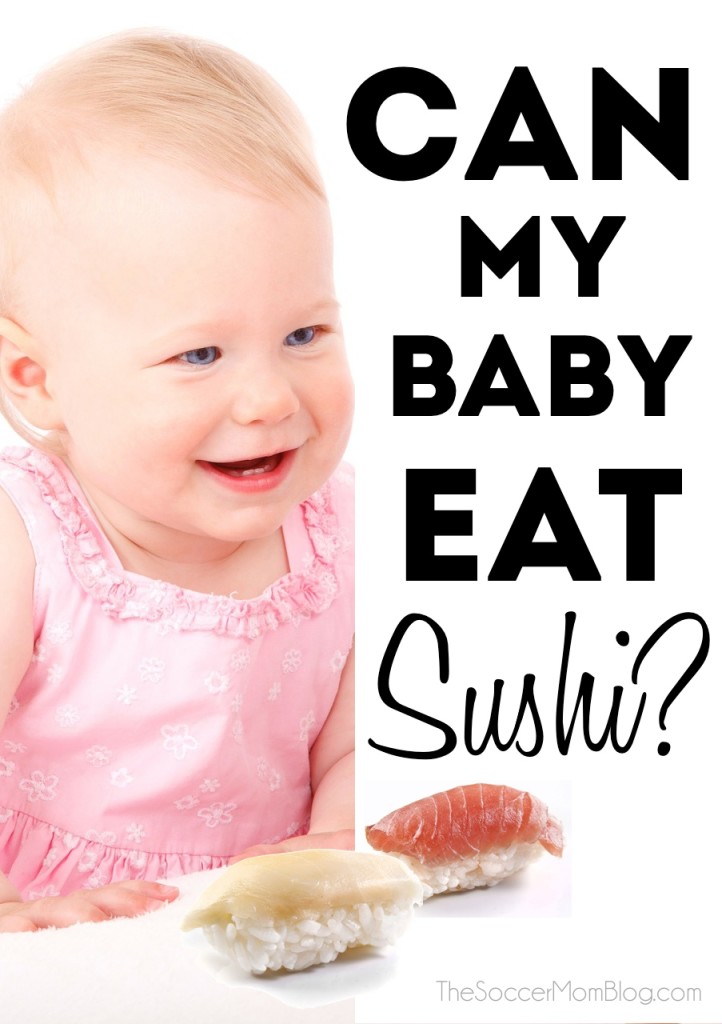 I was pretty sure her pediatrician would say “not yet!!” He is pretty old-school when it comes to nutrition (but a big fan of breastfeeding, so yay for that!) and was shocked that Annabelle had tried (and LOVED) cooked salmon by nine months. He did concede that salmon is packed with nutrients (protein and vitamin D just to name a couple), and said that since she didn’t have any sort of allergic reaction that it was probably fine.

So I obviously paid a visit to “Dr. Google,” but most of my search results were opinions from other parents which ranged from “my baby has eaten EVERYTHING we have since they could have solid food and they are just fine,” to “why would you even ASK this question?? You will POISON your baby!!” Hmm.

Perhaps I should try another angle in my search. How about: “Is sushi safe to eat?” For anyone, kids and adults. Again, I got conflicting information. Fox News points out that there haven’t been any E. coli or salmonella outbreaks linked to raw fish as there have been in chicken and beef. From this perspective, if handled properly, sushi is no more dangerous than any other pre-packaged food item.

NBC News takes a much more conservative stance, saying that sushi should be avoided by pregnant women, nursing women, children under age 12 (really?), elderly, and anyone who might have a compromised immune system. The main focus of the article is mercury contamination, but it also discusses the dangers of parasites and bacteria and makes sure to list a wide range of dangerous afflictions that can result from ingesting tainted fish. Though the article does mention that these parasites are killed if fish is flash-frozen prior to serving.

Here’s the deal: it is illegal to sell raw fish for consumption in the United States that has not been flash-frozen first. This is an FDA regulation, the only exception being tuna. Frozen fish is cheaper and lasts longer, so even the most expensive sushi joints are likely going to be serving frozen fish, even tuna. (Check out this NY Times article for more info).

It doesn’t seem like the fish, in itself, is dangerous. What you really have to be concerned about is the way it is handled, though this is true with any food. A legitimate sushi restaurant will likely take every precaution possible — it is their reputation and business on the line, after all.

Not being able to find any concrete recommendation on the subject, it seems that it is a judgement call. I would say it’s very similar to the question of if it is ok to eat sushi while pregnant. I’ll put it out there that I did on a few occasions, enjoy a couple pieces of my favorite salmon nigiri from our go-to place during my third trimester. I have a sensitive stomach, but of all the things that have ever made me ill, sushi is not one of them, so I figured that it was no more risky than eating a salad at a chain restaurant.

So back to my original question: can my baby eat sushi? A couple things to keep in mind:

Though Annabelle eats almost everything we do (and loves strong, even spicy flavors), I’m not sure if I’m completely comfortable with the raw fish idea yet. If I’m not comfortable with something, then there’s no reason to push the issue. The way I look at it: eating raw fish is not crucial for her diet and even though she “begged” for it, she doesn’t know what she’s even asking for.

As much as I love introducing Annabelle to new things, I think she can wait a few more months to give her digestive and immune systems ample time to develop. Both of our girls are food adventurers, and I know that Annabelle is going to be a huge sushi fan later down the road. Maybe it’s good that we are waiting so we will have time to save up for TWO little girls with huge appetites and expensive taste! 🙂

This Sushi Slicing Playset by Melissa & Doug makes great practice! Lilu LOVES to play with it at her Aunt Kathleen and Uncle Derrick’s house.

What do you think? Has your child tried sushi? How old were they when they tasted it for the first time?

Disclaimer: This an opinion piece. Though I’ve made every effort to find and share information from reputable sources, I am not a medical professional and this should not be taken as medical advice. I’m just a mom looking for an answer to a question of my own and sharing what I found.

Love the fonts you see? I found some of them here and you can too!
23 shares