Inside: Take your homemade slime to the next level with this groovy glow in the dark slime recipe! Safe for kids – made with all edible ingredients! 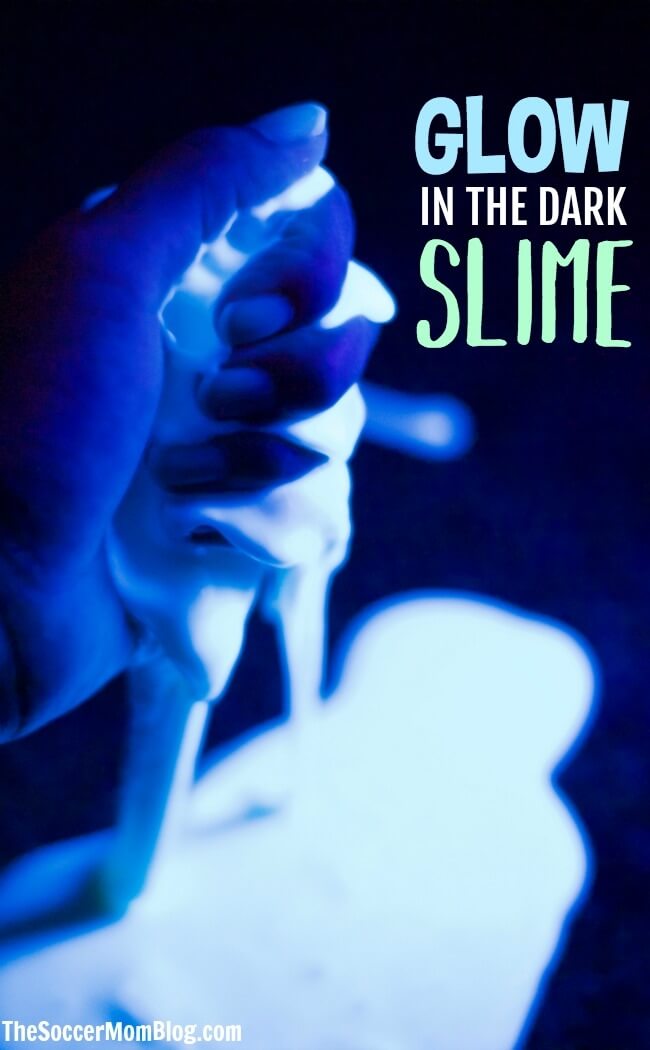 I grew up playing with slime (anyone else remember Nickelodeon Gak?!) so when the “slime craze” hit about a year ago, I was probably even more excited than my kids!

When we first started experimenting with homemade slime recipes, I stuck with taste-safe ingredients. When you have a toddler that puts everything in their mouth, you just have to assume that she’s going to try to taste the slime too!

We’ve made edible chocolate slime, and pudding slime, and Jello silly putty…so I got to thinking…could we make glow in the dark slime that’s edible too?

I pulled out an old bartending trick and incorporated a “secret” ingredient that makes food and drinks glow under a blacklight. It totally worked with our slime!

This glow in the dark slime is based on oobleck recipe, though incorporating fluffy marshmallows gives it a little extra “oomph” and thickness. But it’s still nice and oozy – perfect to squeeze through your fingers.

Related: Glow in the Dark Crunchy Slime with Perler Beads 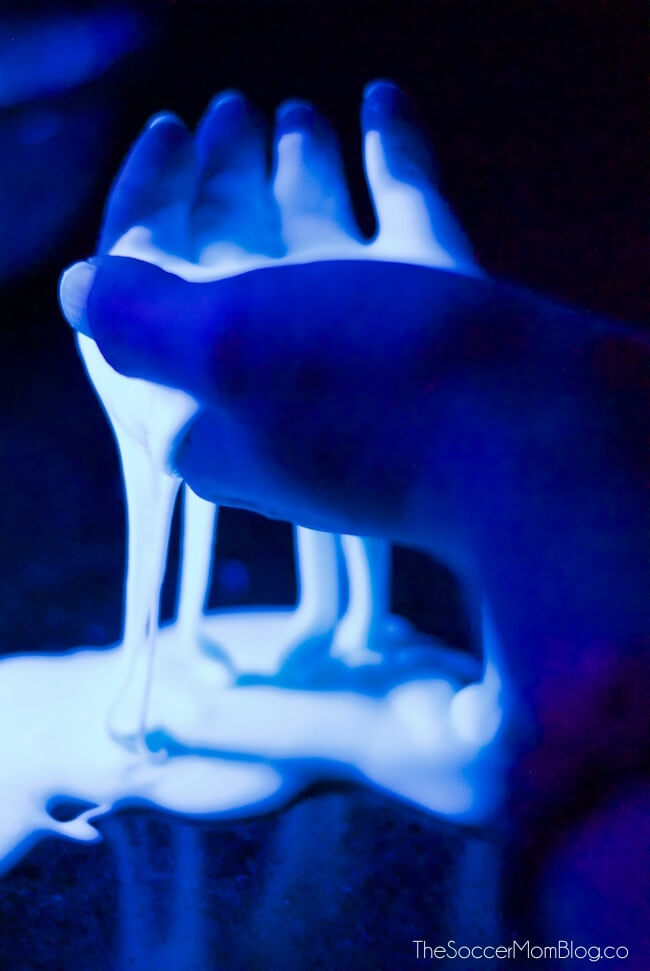 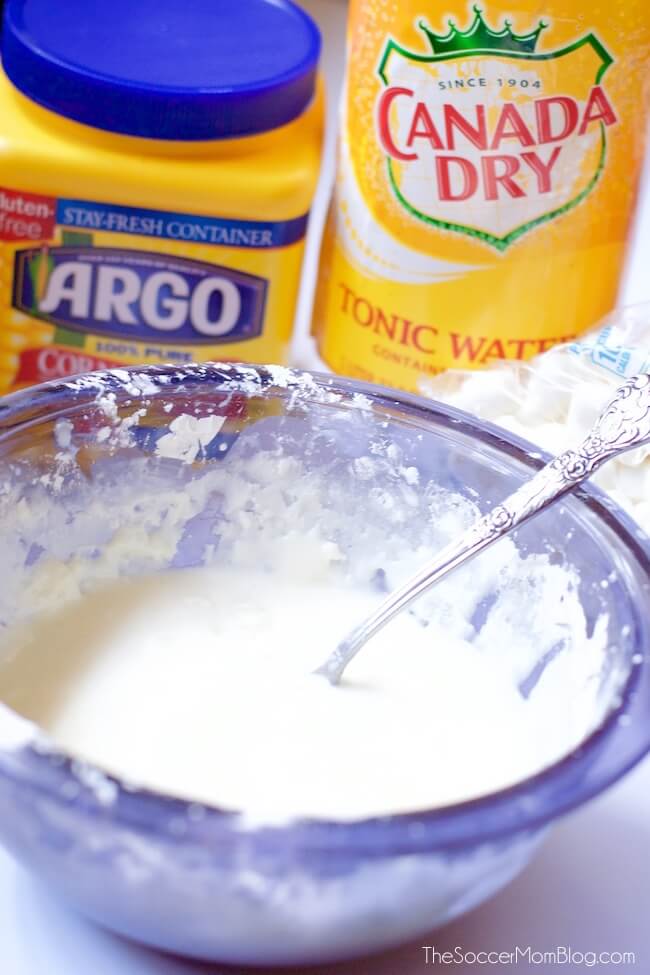 Just a note: This glow in the dark slime recipe is made with all edible ingredients, so it is taste-safe. However, it doesn’t exactly taste what I would consider delicious, so I don’t recommend eating as a food or in large amounts. Always supervise kids when making and playing with slime.

How to make edible glow in the dark slime

Place 1 cup small marshmallows in a microwave safe bowl and microwave 20-30 seconds, stirring halfway through. Remove from microwave and spoon into your mixing bowl where you’re making slime. (Use caution, as bowl may be hot).

Whisk marshmallows into your mixture until smooth.

Add remaining cup of corn starch little by little, stirring as you go, until you reach your desired consistency. If you prefer more of a liquid oobleck, use less cornstarch. If you prefer a thicker, dough-like slime, use more cornstarch.

*Optional – add a drop or two of your favorite food coloring so the slime looks colorful under normal light too.

This glow in the dark slime will be similar in consistency to a oobleck, though a bit thicker than traditional recipes.

Turn down the lights, pop on a blacklight, and have a glowing good time with your glow in the dark slime!

Tip: Make your own “blacklight” with this cool phone hack from my friend Jennifer at Sugar Spice & Glitter!

How does it work?

Our “secret” glowing ingredient, tonic water contains a substance called quinine, which is fluorescent under UV light (your blacklight). Read more about how it works here. 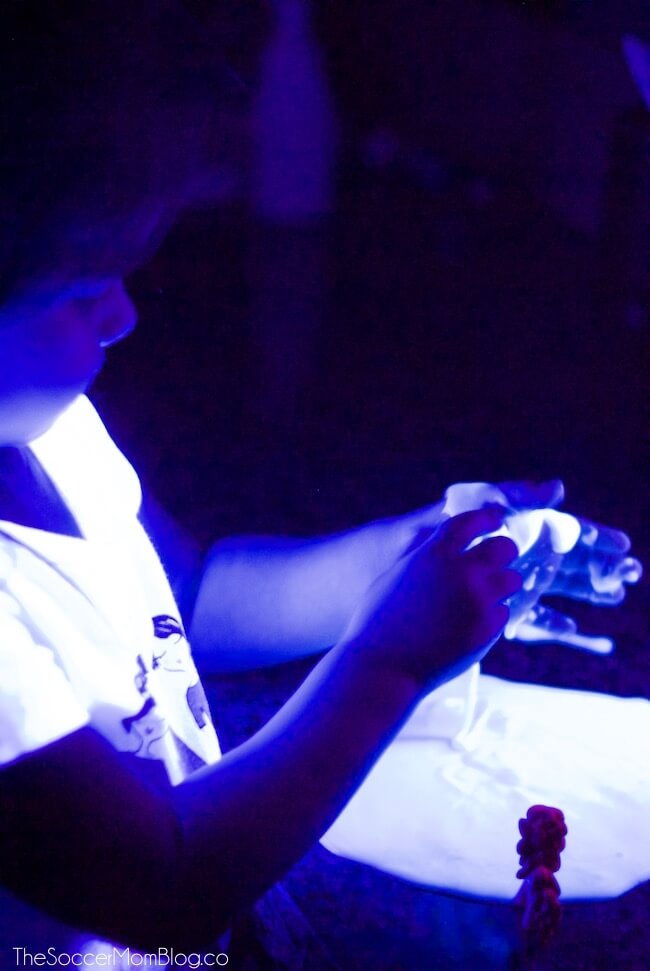 Safety disclaimer — Large doses of quinine can have adverse affects in some people, but the amount of quinine in tonic water is very small and considered safe by the FDA. This slime recipe is technically edible, but please don’t consume as a food item or in large amounts.

There are three starter slime recipes that form the base for hundreds of awesome slime variations, like this Taste-Safe Glow Slime. Once you master these basic recipes, you can make almost anything!

Click here to learn how to make slime using our three starter recipes!

Get over 100 pages of slime recipes in our Updated 2nd Edition of The Slime Book! Now available in both PRINT and digital formats! 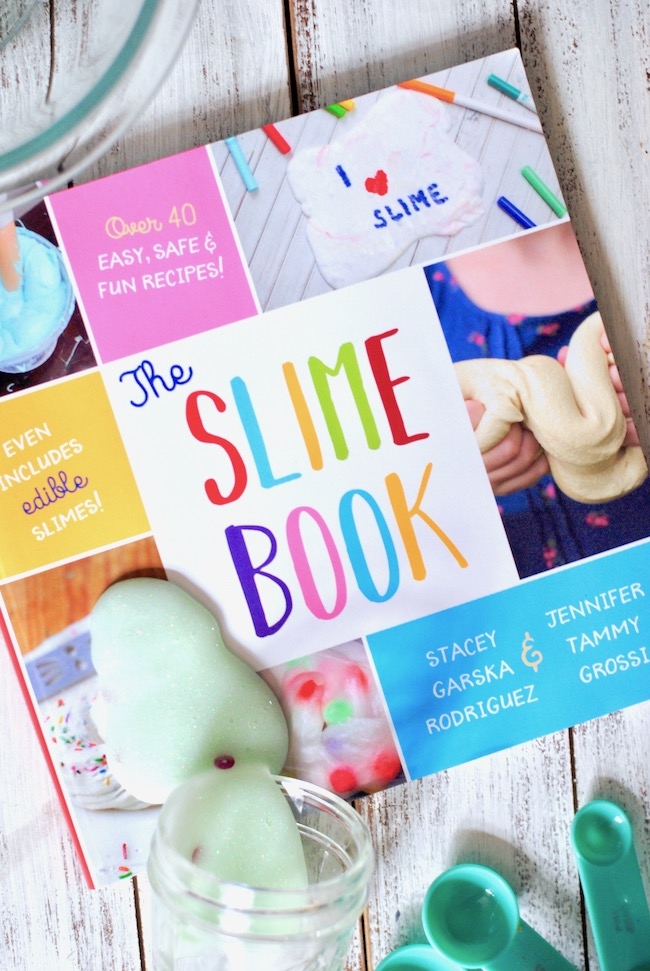 From seasonal & holiday slime, to glow-in-the-dark slime, there are 43 unique slime recipes for hours of play! Many of them are brand new and never published!

CLICK HERE to see ALL the recipes grab your copy of The Slime Book today!

Love the fonts you see? I found some of them here and you can too!
1169 shares