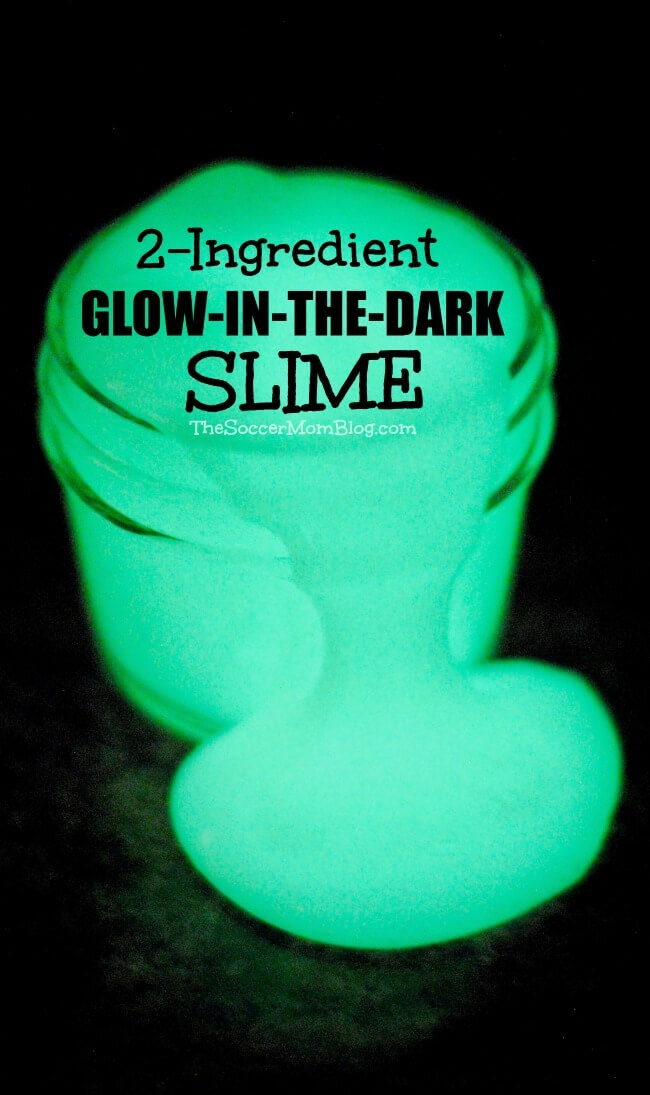 2 Ingredient Glow in the Dark Slime

We make a LOT of slime in our house. It’s one of our favorite sensory play activities! Plus, the girls and I love to experiment with new combinations of ingredients and brand new slime recipes — even edible slime recipes!

However, when you experiment with slime, there will be a lot of “slime fails” too. It comes with the territory! And if you’ve made a lot of slime in your house too, then you’ve likely experienced some slime fails like us.

That’s why I was intrigued when I heard about Elmer’s Magical Liquid, which allows you to make slime, like our glow in the dark slime, with only two ingredients!

There’s no need to mix up multiple ingredients, which means there are fewer variables and fewer chances to make mistakes.

Are slime fails a thing of the past??

Related: Use this glow in the dark slime to make our glowing Galaxy Slime!

What IS Elmer’s Magical Liquid?

Elmer’s Magical Liquid is an all-in-one slime activator. It’s the “magic” ingredient that turns your regular old glue into super stretchy slime! You can make slime without the hassle of complicated recipes!

*Just a quick note that this is not a sponsored post. We are simply huge slime fans and wanted to try out a new slime activator we saw and share the results with you in case you want to try it too. 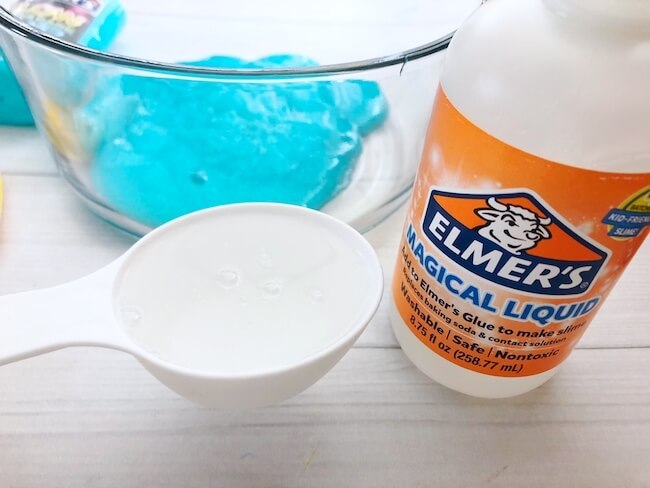 According to Elmer’s website, Elmer’s Magical Liquid is “safe, washable and nontoxic” and each bottle makes 4 batches of slime.

Keep reading to see how we made our 2-ingredient glow in the dark slime, plus our verdict on Elmer’s Magical Liquid! 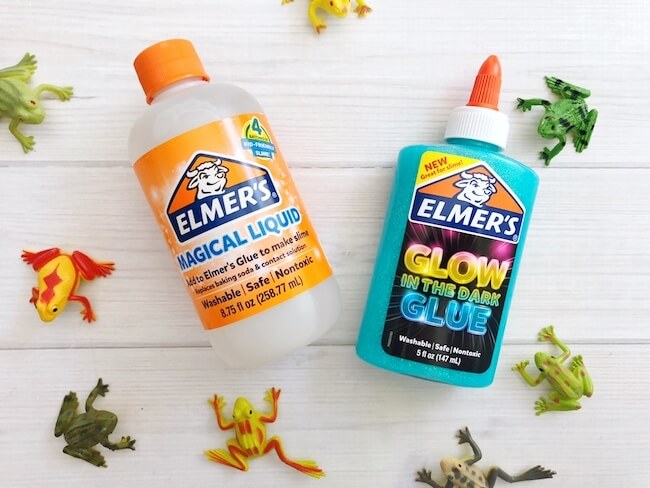 For your convenience in re-creating our easy glow in the dark slime, we’ve included shop-able ad links to the products we used. Our disclosure policy is available here.

You only need two ingredients for this glowing slime recipe! How awesome is that?!

Does Elmer’s Magical Liquid work with any glue?

When making slime, we generally stick with Elmer’s Glue because it produces the best results. However, you can use some other brands, so long as they are PVA glue.

PVA stands for polyvinyl acetate and is a type of polymer that reacts with Elmer’s Magical Liquid (or other slime activators) to create stretchy slime.

Non-PVA glues use other types of adhesives and won’t have the right chemical properties to make slime.

What is the best slime activator?

Slime making doesn’t get much easier than this! If you want to make slime in a hurry and don’t want to take a chance messing up, this is a great alternative to traditional slime recipes. Also, Elmer’s Magical Liquid is less expensive than many contact lens solution brands.

I especially love that this glow in the dark slime doesn’t require a black light to work. It actually glows so strongly that you can see it glowing without turning out all the lights!

While I still love the “science experiment” aspect of mixing up slime recipes with multiple ingredients, if you want the easiest glow in the dark slime recipe, this is it!

If you can’t find Elmer’s Magical Liquid, try either of these easy slime recipes made with different activators:

All you have to do is swap out the regular glue used in either of the above recipes with glow in the dark glue!

Empty an entire 5 ounce bottle of Elmer’s Glow in the Dark Glue into your mixing bowl. You can use any color of glow in the dark glue you like. 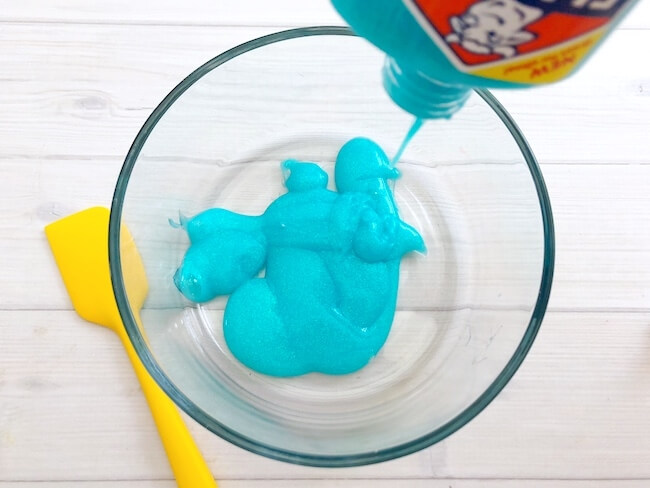 Next, measure out 1/4 cup of Elmer’s Magical Liquid and add to the mixing bowl with the glow in the dark glue. Mix will with a spoon or spatula. Slime will begin to form into a cohesive ball as you stir. 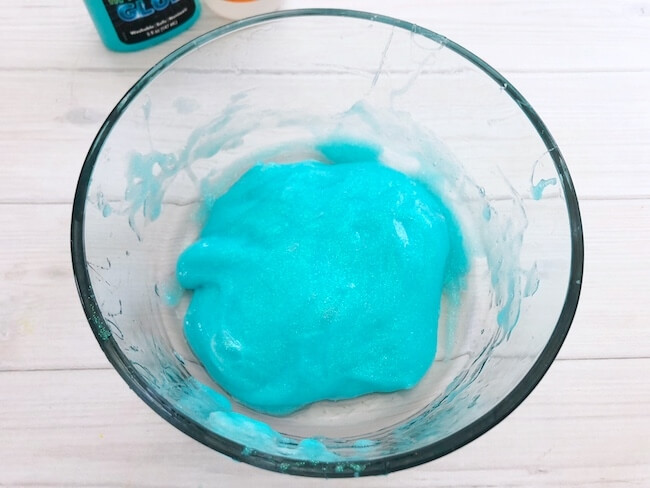 Finish kneading slime by hand. If slime still seems a bit sticky, add another teaspoon of Elmer’s Magical Liquid and continue mixing until slime no longer sticks to hands. (You may end up using anywhere from 1/4 cup to 1/2 cup Elmer’s Magical Liquid, depending on the consistency you like for your slime).

Now it’s time to play with your glow in the dark slime! 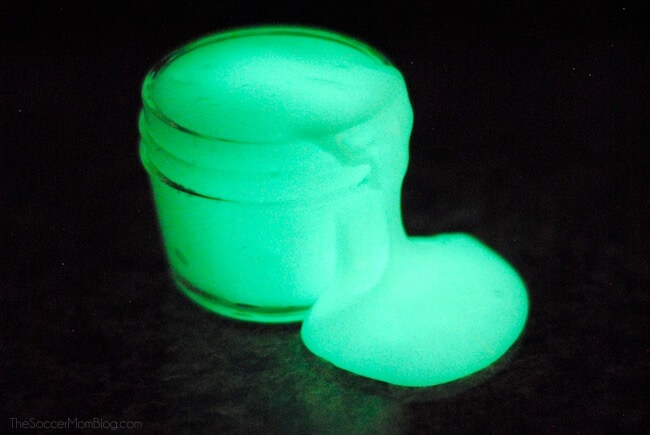 You can even add little figurines to your slime! Spiders and other creepy-crawlies would be perfect for glow in the dark Halloween slime!

Related: For a taste-safe alternative, try our Edible Glow in the Dark Slime here!

The actual “recipe” for Elmer’s Magical Liquid is top secret! However, it is billed as a safe, non-toxic alternative to other slime activators such as borax.

Even though it is non-toxic, you’ll still want to be sure to follow basic slime safety procedures:

For glue-free slime alternatives, check out our complete guide: How to Make Slime (without Glue or Borax)

More of our favorite slime recipes: 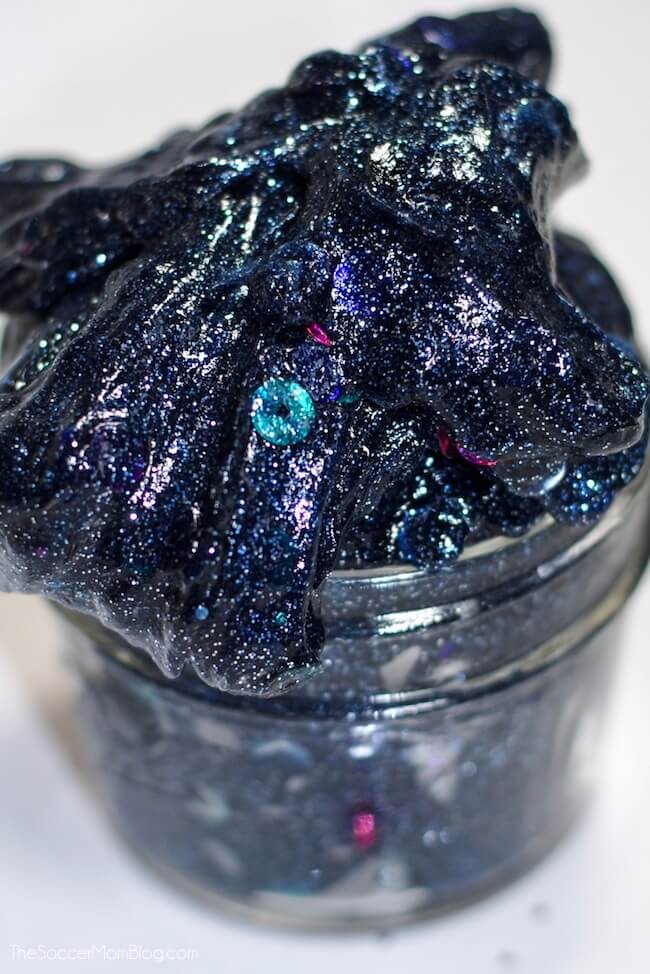 Love the fonts you see? I found some of them here and you can too!
23397 shares