This post was actually my husband’s idea(!!) and he made all the suggestions except one (which was mine and to which he fully concurred). My husband is a bit of a movie buff and has a large DVD collection that he would never dream of downsizing. It actually came in handy when we were creating our Valentine’s Day movie list, since I had to catch up on a couple of the titles.

Valentine’s Day movies are notoriously sappy, and at least in my experience are something that a guy will grudgingly sit through to please his date. The idea here is a list of Valentine’s Day movies that both parties will enjoy, and still fit in with the romantic theme. There are a few classics here, but you won’t see The Notebook on this list, because come on, what guy actually likes that one! 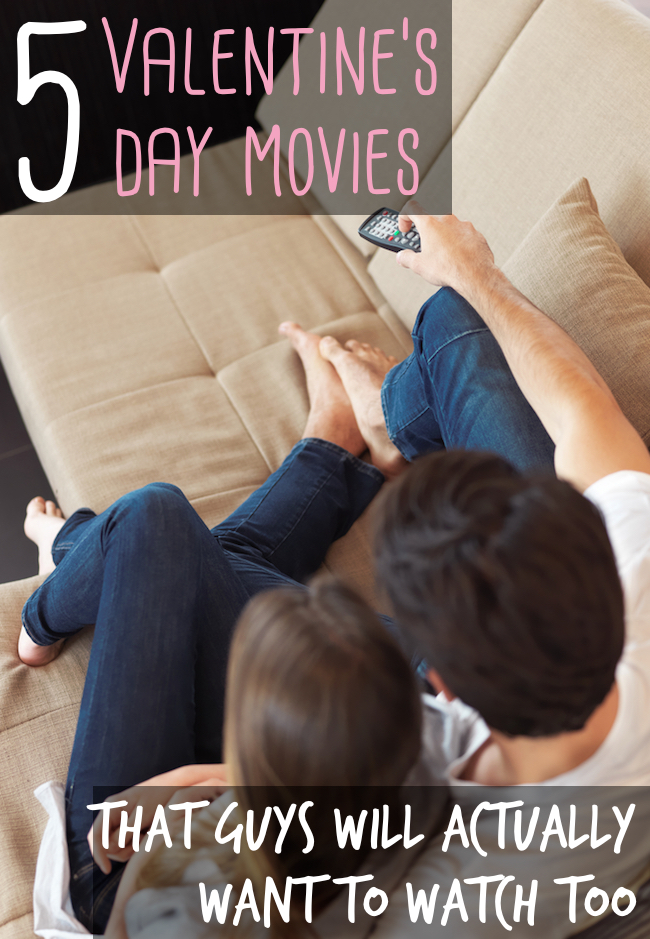 5 Valentine’s Day movies your man will actually want to watch too:

This was one I hadn’t seen yet, so my husband and I had a movie date because he insisted it is one of his all-time favorites. I loved it within 5 minutes! Everything about this movie is so witty — even the camera angles can be downright hilarious. (Seriously…I laughed so hard at the way some of the scenes were filmed! So unexpectedly clever!) The basic gist is that Will (Hugh Grant) is a playboy floating through life on a decent bit of family money. In a seemingly genius ploy to hook up with single moms, Will creates a fake two year old son to “fit in,” but things go decidedly awry. I don’t want to give too much away — just trust me when I say that this movie is one of the best I’ve seen in a while, even if it is over a decade old.

Perhaps this could be considered “The Notebook” of the previous generation. It’s definitely an all-time romantic classic — and for good reason! It’s been a LONG time since I’ve seen this and I really enjoyed getting up to speed on another recent movie date with my husband. (This post was actually a lot of fun to work on! Watching movies = research!) There’s something about this movie that captures the essence of the 90’s and there is an innocence that is refreshing. I loved the clothes, the styles, even the office furniture took me back! If you haven’t seen it — you must! If it’s been a while, watch it again! You’ll be so happy you did.

My lone suggestion for the list, but my suggestion was met with enthusiasm and readily accepted as one of the top five. This is a family favorite and growing up I’ve seen this movie dozens of times — too many to count! (What girl of the 80s didn’t dream of being a princess with her very own “Farmer Boy” to rescue her??) A fairy tale romance with a bit of fantasy and lots of goofy jokes, it’s a safe one to watch with kids too. This is an all-star cast and as far as I’m concerned is one of the best movies ever made. Ever. If your husband is a wrestling fan (especially of the older stuff, like I was as a kid) then he will love to see one of the heroes of the sport, Andre the Giant, in a charming performance outside of the ring.

Forget Paris is another one of my personal favorite movies, so when my husband named it as one of his favorites too (who knew?!) I of course agreed that it needed to be on the list. My best friend introduced me to this movie in high school and we watched it because we thought it was funny — not because of the love story. Perhaps that’s why Forget Paris is so perfect for this list, because it is as much a comedy as it is a romance. Billy Crystal is an NBA referee that meets the love of his life on a trip to Paris for a funeral. Friends of the couple recount the story of their marriage while waiting for them in a restaurant, so you get differing perspectives on the who thing. Cameos from some of the biggest names in basketball of that era make extra incentive for sports fans to watch. Aha! So that’s why my husband likes it so much!

The love story of all love stories gets a makeover: the dialogue is the traditional language you’re used to, but performed in front of a gritty modern-day backdrop. An star-studded cast led by the teen crushes of the 90s in Leonardo DiCaprio and Claire Danes and a stellar soundtrack pulls you in and makes you forget that you’ve heard this tale many times before.

Love the fonts you see? I found some of them here and you can too!
49 shares