Looking for signs you are pregnant? Keep reading for 10 early pregnancy symptoms you may experience before your first missed period — from a mom of 3.

When you think you might be pregnant, but it’s too early to take a pregnancy test, you’ll often look for any signs that you are pregnant. I sure did anyway!

With all of my pregnancies, I suspected that I might be pregnant because I experienced some of the very early signs of pregnancy. Even though a test said “negative,” I just had a feeling that it only said so because it was too early to tell.

While the only surefire way to know if you are pregnant is with a pregnancy test, there are quite a few early symptoms of pregnancy to look for that may give you a hint. 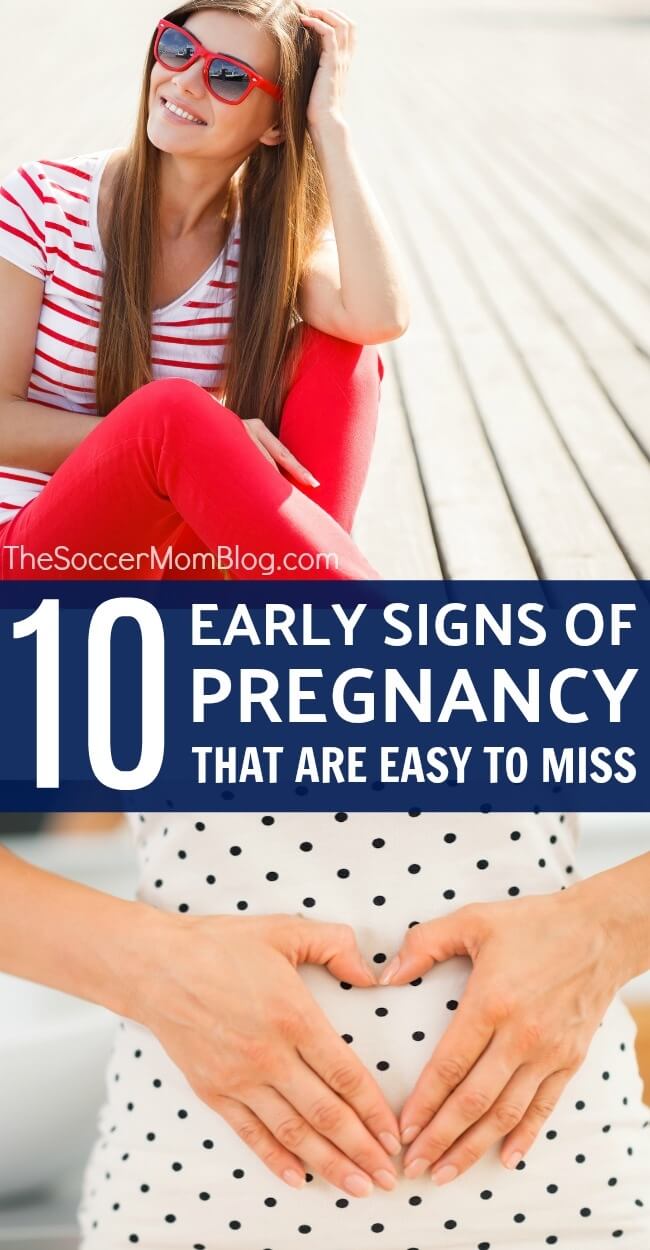 The following are some of the most common early pregnancy symptoms, but they are easy to miss or often confused with other things.

Also known as implantation bleeding, light spotting (that is not a menstrual period) is caused by the fertilized egg attaching itself to the uterus wall. (source)

Implantation bleeding usually occurs between 6 and 12 days after conception (source), and is generally light pink or brown in color. This is much less than a normal period.

If you experience spotting that lasts for more than 1-2 days, is heavier in flow than “spotting,” or is bright red in color, please consult your doctor or midwife. Spotting can be completely normal in pregnancy, but it can also be a sign of miscarriage.

This was a big one for me! With all of my pregnancies, I felt completely exhausted — especially during the first and third trimesters.

If you’re feeling more tired than normal, or completely drained with no reasonable explanation, this could be an early sign of pregnancy. 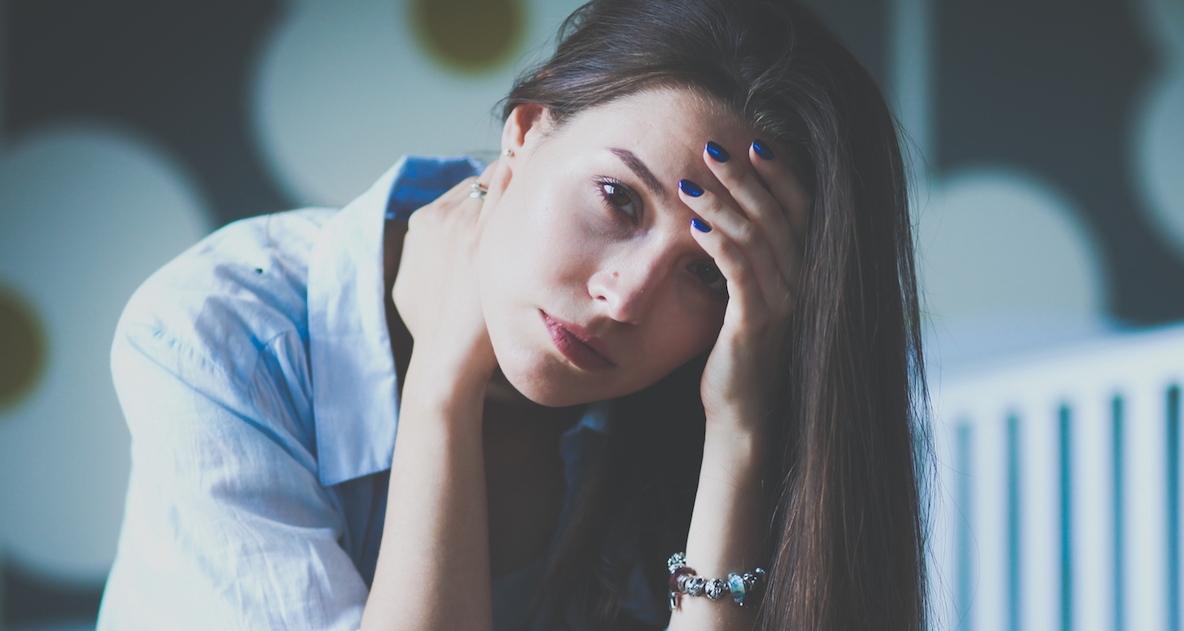 Related: Could it be Postnatal Depletion?

What used to be your favorite food may now turn your stomach simply at the thought of it!

Food aversions are common throughout pregnancy, and may be one of the earliest signs that you are expecting.

Smells were a big one for me, and I worked in a restaurant during my second pregnancy! It was a daily struggle to stay focused and keep from becoming sick around all that food.

While old favorites might be out of the question now, there may be new food cravings to take their place. While pickles and ice cream are one of the funny combinations that people often joke about, cravings don’t necessarily have to be for “weird” foods.

During my last pregnancy, I craved Cocoa Pebbles cereal — it was a childhood favorite, but not something I ate often as an adult.

However, as soon as I had my baby, I was over it!

Feeling sick to your stomach, nauseous, or queasy is a very common early symptoms of pregnancy. You may throw up, or you may not.

During my last two pregnancies, I experienced severe nausea and morning sickness, though I only vomited a handful of times. While it was a relief not to be running to the bathroom all day long, I often felt so sick that I couldn’t get out of bed.

What a relief to get to the second trimester, when the symptoms of morning sickness generally lessen.

Related: 10 Home Remedies to Get Rid of Morning Sickness that Really Work

Swelling, soreness, or tenderness of the breasts are common very early symptoms of pregnancy. Since breast tenderness is also a common PMS symptom, it can be easy to overlook.

This was a sign of pregnancy that I experienced every single time, so I got better at recognizing it.

When I was pregnant with my youngest daughter, I felt remarkably calm — at least compared to my first two pregnancies. During those earlier pregnancies I can only describe it as “feeling crazy” at times!

Mood swings are a common early sign of pregnancy, as your body is beginning to go through some substantial changes and your hormones are through the roof.

During pregnancy, your body produces more progesterone. When there are elevated levels of progesterone in the body, its acts like a muscle relaxant to the stomach and intestines. This can lead to constipation, as food is pushed through the digestive tract more slowly. (source)

As the uterus grows, it can also restrict parts of the digestive tract, which may also cause constipation. (source)

Interestingly, some pregnant women may experience just the opposite — diarrhea is also common throughout pregnancy. This may be caused by changes in diet or hormonal changes in the body. (source)

With both constipation and diarrhea, staying hydrated is key. Drinking plenty of water may help ease constipation, and it can prevent dehydration that is a risk of diarrhea.

Related: How to Drink More Water Every Day Without Thinking About It

When I was pregnant with my middle daughter (but didn’t yet know it), a friend of mine told me had a dream that she believed meant that I was pregnant. Incredibly, she was right! (Really!!)

However, pregnant women may also experience strange dreams themselves. Insomnia and vivid dreams may be an early symptom of pregnancy, caused by a variety of factors, such as hormonal changes. (source)

This is a completely un-scientific sign of pregnancy, but your gut feeling is often the best indicator.

With all of my pregnancies, I felt different right away. With my third daughter, I had a sneaking suspicion I was pregnant, so I took a couple tests early on — but they came back negative.

However, I just knew something was up, so I took yet another test a couple weeks later. Boom! Pregnant!

You know your own body better than anyone else, so if you pay close attention, your body may be trying to tell you something!

Read this next: 15 Things to Do when You Find Out You’re Pregnant

What if I don’t experience any early pregnancy symptoms?

Even if you don’t experience any of the above early symptoms of pregnancy, it is possible to still be pregnant.

A pregnancy test is the only way to know for sure!

When Can you Take a Pregnancy Test?

The best time to take a pregnancy test is at least one week after your first missed period, or when you expected your period to happen.

However, there are some pregnancy tests on the market that may detect pregnancy hormones earlier — up to 6 days before your missed period.

Tip: I always bought the First Response Early Result Pregnancy Test 3-pack (affiliate link) so I could test more than once if needed.

If you take a home pregnancy test and it comes back positive, you’ll want to make an appointment with your doctor or midwife to confirm your pregnancy.

If a home pregnancy test comes back negative, but you still feel pregnant, you may want to re-test in another week or two. This is what happened with me and I now have a healthy 10-month old baby girl! 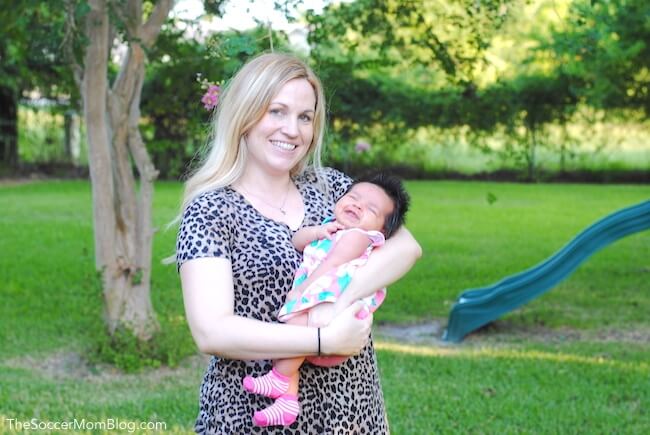 And even if you’re not pregnant this time, you’ll have a better idea of what to look for next time.

Disclaimer: This post is based on my own experience and research. It is not intended to be medical advice. Always consult your health care provider for medical guidance.

More of our most popular pregnancy posts: 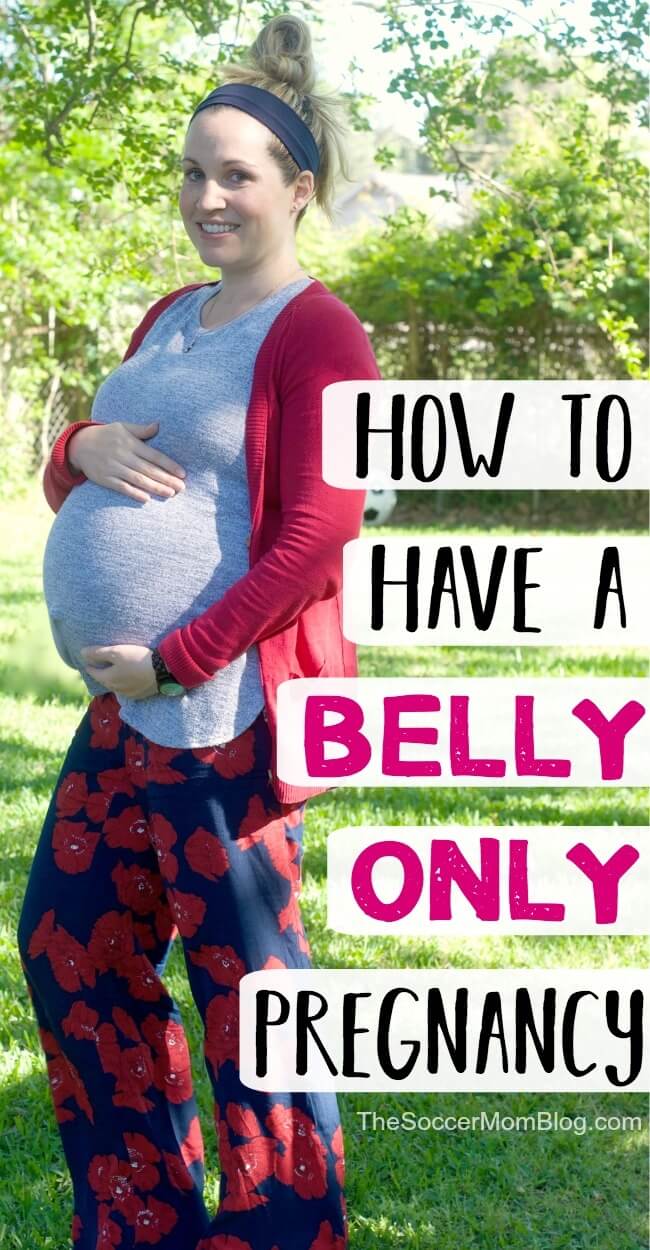 How to Have a Belly Only Pregnancy 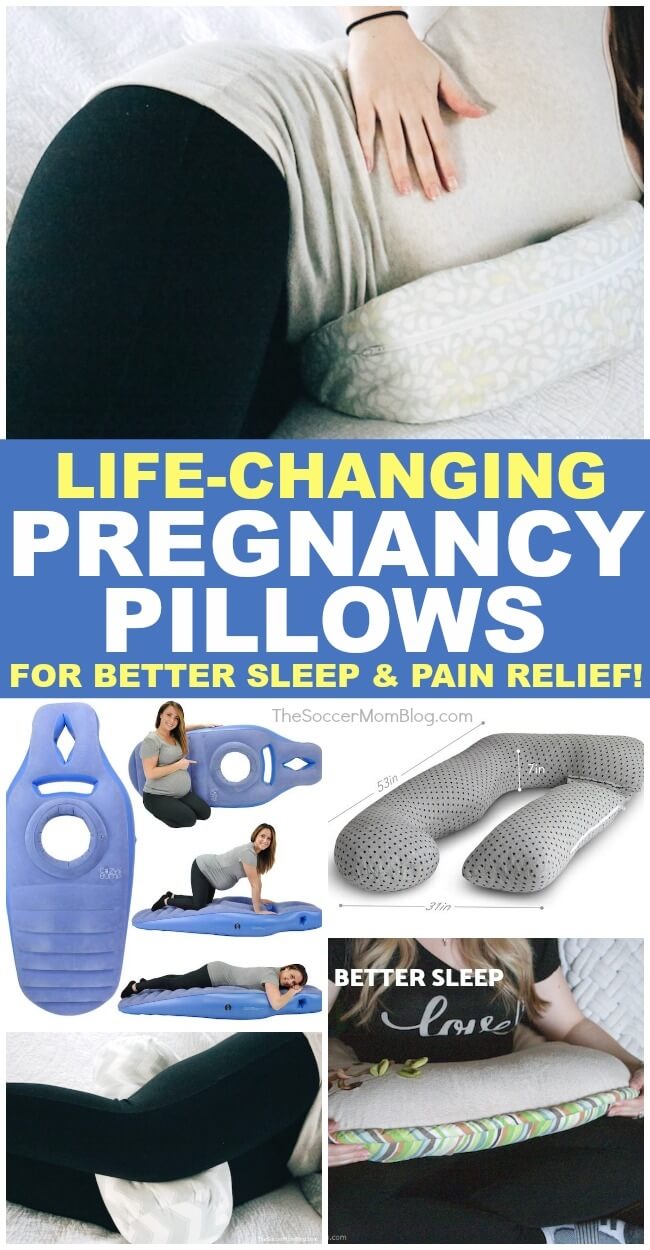 Click here to see my picks for the best pregnancy pillow, to sleep better!

Love the fonts you see? I found some of them here and you can too!
25 shares