Melania Trump’s speech at the Republican National Convention sent shockwaves across the nation. When played side by side with a clip from a 2008 Michelle Obama speech, it was clear that Trump’s bore too much similarity to be coincidence.

Pasting Mrs. Trump’s speech in Grammerly (an online tool which can check for plagiarism), as did the International Business Times, shows “significant plagiarism detected.” However, there were a surprising number of people jumping to her defense — and not just because she likely didn’t write the speech.

“If it’s not word for word, it’s not plagiarism.”

“So she can’t talk about wanting her kid to reach her dreams without being accused of copying? I guess we are all plagiarizing every day then!”

Let’s be real — a good thirty seconds of Melania’s address was almost verbatim to what Michelle Obama said a few years prior. A couple words might have been switched around, but there is no denying where she (or her speech writer) got their “inspiration.”

My first thought while watching live: this is SO bad that it has to be sabotage. She and her team couldn’t seriously think they would get away with this.

But what if they DID think they would get away with it?

You might be surprised to know how much of what you’re reading is regurgitated content, often without permission from the original source.

The first time I experienced blatant plagiarism of my work it was by the Huffington Post UK. I was made aware when I started noticing a tiny bit of referral traffic in my daily analytics report. At first I was excited — isn’t every writer’s dream to be published on a major internet news source?

Then reality began to sink in. I never submitted anything to the Huffington Post.

I did a little digging and found a brand new HuffPostUK article about reasons children won’t sleep. Except what I read was actually half of my own popular blog post about toddler sleep. Huge chunks of my EXACT words had been slapped with quotation marks and presented as an interview.

Except of course, I had never spoken to this “author” in my life. Instead of doing her own research and legwork, she simply ripped off an extremely popular piece from another writer. What’s worse, she was actually the Senior Editor of the Parenting section. She knows better.

If plagiarism is not only accepted, but practiced by the top brass in an organization, it is likely standard operating procedure. Surely I was not their only victim.

The best way I can explain this is to tell you why plagiarism matters to me.

No, that is not an exaggeration. When Huffington Post takes my popular blog post and puts it on their much larger website, they essentially take the “juice” from my post as well. Their huge readership and social media following makes it easy for their posts to go viral. If they’re used the same keywords, search engines might think that their article is the go-to source for the topic. My original post falls into obscurity, along with the potential revenue it could bring my family.

This is my “real” job. This is my family’s main source of income. It IS a big deal.

Plagiarism is NOT Flattery

This is an educated guess, but I bet that a lot of bloggers end up promoting their plagiarized work.

As I mentioned earlier, my first instinct when I figured out the Huffington Post had linked to my site was excitement. Being featured on a major publication is often seen as a badge of honor and good “exposure.” Not only will some bloggers not fight back if their work is stolen, they might actually share the plagiarized piece because they are proud to have their name on a viral article. Even if it is not truly going to benefit them.

See, exposure won’t pay my bills. But an awesome blog post that brings thousands of people to my website WILL. I would rather build my brand, my following, my business than contribute to a mega-conglomerate that’s doing just fine on its own. Especially when said conglomerate knowingly does things to hurt other writers.

I belong to a support network of parenting bloggers, so I showed the article to them for validation. I wasn’t overreacting…right? Fortunately every single one of them that saw and replied confirmed that this was plagiarism. This was wrong. And they were willing to stand behind me and support me in my campaign to have my stolen work removed from the offending site.

Why You Should Care About Plagiarism

As a part of my strategy to get the larger publication’s attention (in both the Huffington Post instance and a separate incident with personal finance site ClarkHoward.com), I contacted both via social media.

I guess I shouldn’t be surprised to receive some backlash, as social media can be brutal. But I was surprised and saddened when some commenters turned on me. They said I was greedy. They said I should be thankful for the exposure (not that again). They didn’t care.

But we should care, even if writing is not our occupation. 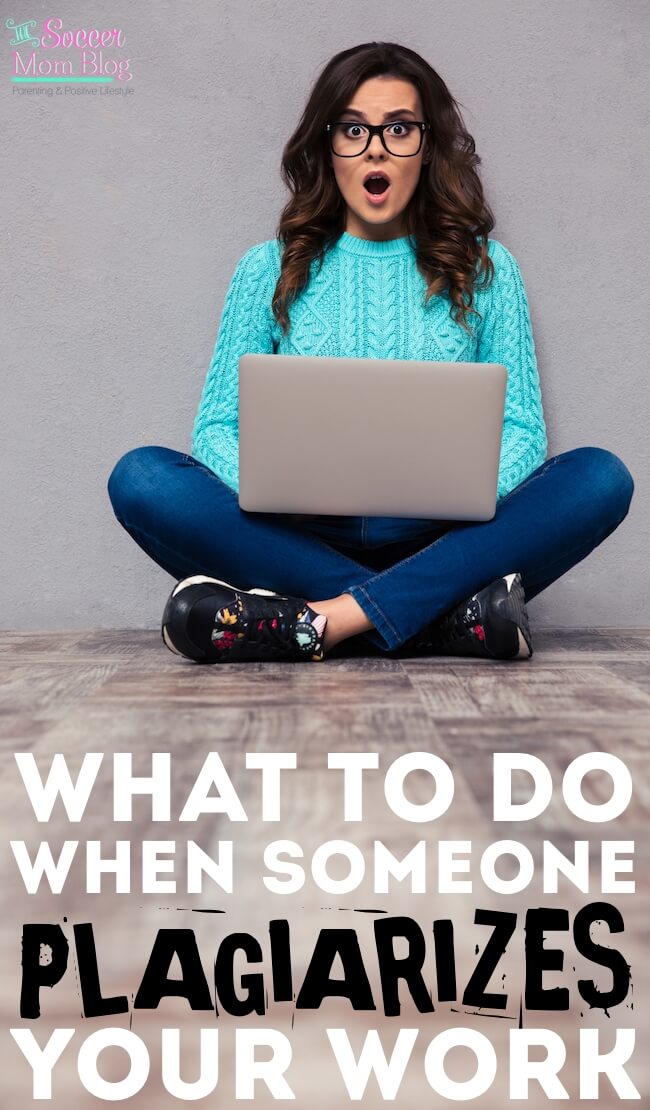 What to do if your work has been plagiarized?

When you find your work copied on another website or social media account, here are some things you can do. I usually go in this order and continue through the steps until I have gotten results.

In the case of the HuffPostUK, they admitted their “mistake” and made my suggested corrections within a day. I was satisfied with that outcome, but I no longer share content from their site out of principle and the worry that they could still be trying the same thing with other non-suspecting bloggers.

But what if a site doesn’t respond?

I don’t have all the answers, and I’m not a legal expert. I know that most writers really can’t afford a costly legal battle with a deep-pocketed corporation. All I can say is don’t give up. Keep emailing, keep tweeting, keep trying to protect your work.

Your work is worth the fight. And if you don’t fight, who will?

Love the fonts you see? I found some of them here and you can too!
174 shares